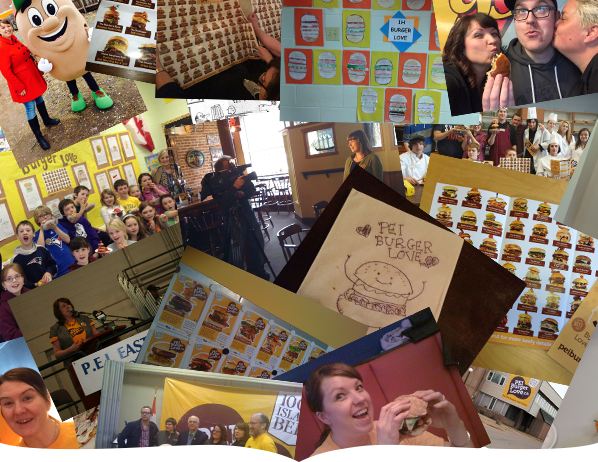 In the summer of 2008, Melody and Robbie from Fresh Media set out on their own culinary adventure to find the best beef burger on PEI. Not surprisingly, the burger they loved the most was proudly made with local Island Beef.

During their tasty journey, they noticed that not every restaurant identified their beef as being from PEI. When they asked servers if the beef was local, many didn't know.

That's when they decided to use Fresh Media’s creative talents to develop a campaign celebrating the amazing beef we have in our own backyard, and to crown the best burger on the Island.

In 2011, Fresh Media launched PEI Burger Love with 14 restaurants and 5,517 burgers being sold. Over the next eight campaigns, there have been more than 1 million burgers sold, with the sales of just the burgers equalling over $13 million. For the past three PEI Burger Love campaigns, there’s been over 180,000 burgers sold per campaign — that’s more burgers than Islanders!

Over the past 9 years, we’re proud of how our campaign has grown to an Island-wide event that brings people together as they experience different restaurants and local products across so many of our communities.

For year 10, we want to bring that same spirit of community and “love of local” to all our food industries by allowing for burgers with different local proteins. In addition to Island Beef, we’re looking forward to having Islanders enjoy other local proteins and supporting as many local farmers and producers as possible.

We once again want to thank Islanders for supporting PEI Burger Love, and we look forward to ‘welcoming everything local to the table’ for year 10!

When PEI Burger Love returned for our 7th year in 2017, a new initiative called the 'Give Back Burger' was introduced as way for Islanders to 'give back' to their local communities throughout the month of April.

The concept was simple: participating restaurants who chose to designate their burger creation as a Give Back Burger donated $1 for each PEI Burger Love burger sold in April to support food security programs across PEI.

Burger fans across PEI did not disappoint, and Give Back Burgers were a widespread success.

Within its first two years, the Give Back Burger initiative raised more than $122, 500 in support of Island Food Security Grants in partnership with the United Way of PEI.

“We were very grateful to be included in the campaign and see this as good news all around,” noted Andrea MacDonald, CEO of United Way of PEI in a quote from 2017. “The promotion has proven extremely successful over the past few years and now offers an opportunity for businesses to Give Back and support local communities.”

Hospice PEI, Native Council of PEI, the Boys & Girls Club of Summerside, and The PEI School Food Project are among the 2017 – 2018 Island Food Security Grant recipients to receive funding which was used to increase access to local and affordable food for Islanders.

In 2019, it was announced at the start of the PEI Burger Love campaign that Anderson House would be the new recipient Give Back Burger initiative. A provincial emergency shelter for women and children who are in need of safety due to violence, Anderson House serves over 400 families Island-wide annually through shelter and outreach.

Knowing the immediate and positive impact the funds raised can have for Anderson House was one of the main reasons we selected them as our recipient.

When the final Give Back Burgers numbers were tallied at the end of the 2019 campaign, a record total of $86,038 was raised to support Anderson House.

“We are touched by the number of restaurants that want to support our valuable work,” said Dayna O'Malley, Executive Director of PEI Family Violence Prevention Services who operates Anderson House. “Any funds we raise goes directly to frontline crisis services to respond to people in need of support.”

As we embark on the fourth year of the Give Back Burger initiative, PEI Burger Love remains committed to helping Island families in immediate need of food support by once again partnering with Anderson House. And Islanders are ready more than ever to pay it forward in the tastiest way through delicious, one-of-a-kind Give Back Burgers.

Click here to view the 40 Give Back Burgers for this year!